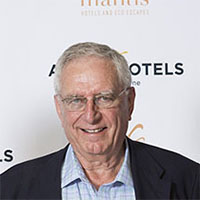 Founder and owner of the Mantis Collection which is a family run collection of privately owned, five star Boutique Hotels and Eco Escapes properties located around the World. Adrian was educated in Zimbabwe and then at the University of Cape Town where he completed a Bachelor of Commerce Degree. His entrepreneurial career began in 1974 and for nearly 40 years he has shown commercial flair in building businesses spanning swimming pool construction and specialist plant hire to commercial retirement and health care centres. One of his major contributions to conservation was the creation of the internationally famous and award winning Shamwari Game Reserve in the Eastern Cape in the early 1990’s. This was followed by the formation of The Mantis Collection www.mantiscollection.com spanning all seven continents of the World. In May 2018 Mantis and AccorHotels announced a Joint Venture and the launching of the Community Conservation Fund Africa (CCFA).